There was sports news last night 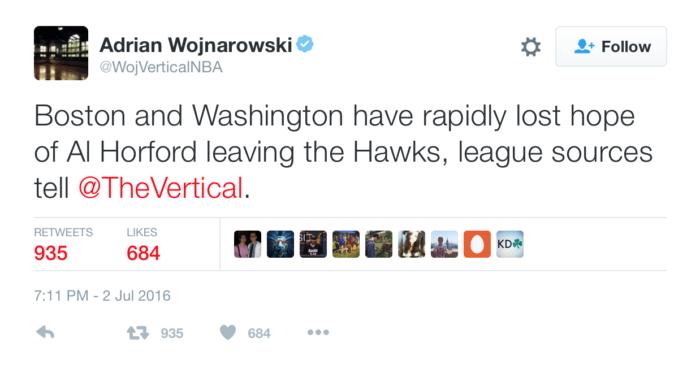 Last night I went out to dinner with some people who don’t like sports news. For a second, I tried to explain sports news to them. I mentioned a banana boat. They were slightly amused. It was interesting to look at people who don’t like sports news while they try to understand sports news. For those who don’t follow sports news, we are in a very important sports news season. It is the nba free agency period. Yesterday Kevin Durant hung out with Tom Brady while Tom tried to convince him to do sports in Boston. Then after the meeting I think Tom Brady called Al Horford and was like, “You should do sports in Boston too.” And he was like, “Okay.” Kevin Durant will probably tell everyone today he wants to do sports in Boston. But he also might say, “I want to do sports in Oklahoma or Oakland or Miami, but probably not in Los Angeles because the Clippers decided to sign the coach’s son instead of me.” Unfortunately, Kevin Durant can only do sports in one city so all the other cities who don’t get chosen will be sad. It was really interesting looking at my twitter feed last night while the sports news was happening. One second everyone was saying, “Al Horford will probably never leave Atlanta.” Then the next moment Al Horford was tweeting eighteen shamrocks and telling everyone he was moving to Boston. Tom Brady probably smiled even though there’s a pretty good chance he doesn’t know who Al Horford is. At the very least if the Celtics don’t end up signing Durant they could always sign another big name free agent like LeBron James.