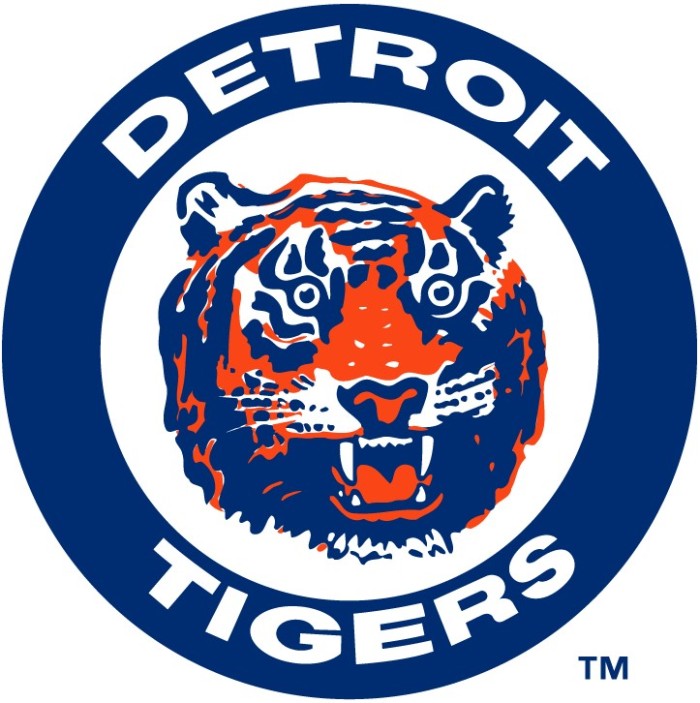 The Surprised Tiger has a reason to be anxious this season.

Did the Tigers do anything this offseason? Oh, right. They let Max Scherzer walk. I guess the idea here is to have big-time mashers and above-average starting pitching, then hope for the best when it comes to the bullpen and defense. That’s worked out well for them in the past few years, but the rotation has some question marks this time around. For the first time in the past couple of years, the Tigers will have more to contend with than just the Royals in the AL Central, as both the Indians and White Sox have made significant upgrades and Detroit looks weaker than it has in years. This will be the Tigers second season without Jim Leyland, and that just feels wrong.

ROSTER SUMMARY
Looks a bit like a 12 year old’s fantasy league. The starting lineup, anyway. I suppose that’s what happens when your team is owned by a guy who is also seated at the throne of a pizza empire. Besides, Detroit as a city needs something to root for, and watching bombs from Miggy and V-Mart is fun (that is, if the city hasn’t cut your power yet).

C: Alex Avila
The Tiger’s mainstay behind the plate is off to a good start, which bodes well for the club, as he has been steadily declining over the past couple of years at the plate. He is one of the best catchers in the league and should maintain the defense but not the hot offense. Oh, and he cannot afford another concussion.

1B: Miguel Cabrera
Plucky and amazing, Miggy has had nagging injuries the past several seasons, but can still put up some of the best numbers in baseball. Even though he was practically one-legged toward the end of last season, he still contributed to the Tiger’s playoff run. He’s back over at first base, (as opposed to third) since he doesn’t have to move much over there. My favorite Miggy moment was the time he reached out and slapped a go-ahead single from a team that was trying to intentionally walk him.

Ian Kinsler 2B
God Ian Kinsler is boring. He’s like that guy who always comes to your friends brunches and dinner parties and you just can’t stand him even though there’s not really any reason for it. I can just write, “One of the top-five guys at his position in baseball.” for all these guys, right? (Editors note: “Yes.”)

José Iglesias SS
Had to sit out all of last year with stress fractures in both shins. It’s bad when your shortstop can’t stand up, right? Has regained the ability to stand up and also run, and he looks pretty good so far this season. Has shown amazing promise and was the key piece in a three team trade between the Tigers and both Sox back in 2013. The ceiling is sky high for him if he can stay healthy.

Nick Castellanos 3B
Oh, except for Nicky C that is … he still needs to figure it out. He’s shown promise so far this season, but it’s still early days so who knows.

Yoenis Céspedes LF
The Tigers love their blockbuster trades, and that’s how they acquired Cespedes last year by sending over Rick Porcello to the Red Sox. The team promptly went on a losing streak after that and in hindsight they should have kept the starter and trading somebody like Castellanos or Davis for some bullpen help. They don’t need more towering homers, they need someone who can keep a 5-run lead past the 7th inning.

Rajai Davis CF
Ten-year veteran will split time with Anthony Gose (see below). He’s only lead the majors in one thing in his entire career: Amount of times caught stealing in 2012. Though Davis got the Opening Day start, I’d wager Gose sees quite a bit of time.

JD Martinez RF
A crazy smart move was taking a flyer on Martinez before last season. He was DFA’d by the Astros. THE ASTROS! And then put together a stellar season last year, basically out of nowhere.

Victor Martinez DH
Damn, I was hoping V-Mart was going to start the year on the DL. He has bum knees, but ever since coming over to Detroit they haven’t kept him from tearing up the basepaths. Not that I wish him ill will or anything, but it would have been nice for the Royals to not have to settle for the Wild Card spot this year and actually win the division.

Anthony Gose OF More than a bench player, he might actually be in more games than Rajai Davis when all is said and done. Coming over from the Blue Jays, Gose will add a bit of speed to a lineup full of lumbering dinosaurs.

James McCann C Kind of sucks that he’s not the other McCann’s little brother or something. He did make a bird explode with a foul ball once though.

Andrew Romine UT His father was a utility outfielder, and he’s a utility infielder. Also, his brother is a catcher.

STARTING PITCHERS
“Hey! Let’s trade away all our promising young back-of-the-rotation pitching depth and then bring in moar power hitters!” This line of thinking over the past few years is now leading to lots of headaches, as it’s great when Miggy, V-Mart and Cespedes crush back-to-back homers, but who’s gonna pitch when the other team takes their turn at bat after David Price or Annibal Sanchez? Yes, I’m intentionally leaving Verlander out of that sentence.

David Price
Bringing over David Price was pretty epic when they also had Max Scherzer, but now it’s not quite as interesting. Sure he’s great, an innings eater, and anyone would want him as an ace, but he’s not a ridiculously awesome addition to a frightening rotation when it’s just him cuz he can only pitch once every five days.

Justin Verlander
Poor Justin is not the young stud he once was. After becoming regression’s bitch last year, he will start out the year on the DL. At least he still has a smoking hot girlfriend, amirite?

Anibal Sanchez
Really the only bright spot in the rotation aside from Price. Lead the majors in several categories back in 2013. And in things that matter too, like ERA, ERA+ and homers allowed per 9 innings pitched.

Shane Greene
Had one really good year in New York last season, but is that fluke or not? That’s the big question on this kid. I mean he had an ERA over four in the minor leagues and he wasn’t a big prospect or anything, did he just have some big breaks with the Yankees in those handfull of starts? (Editor’s note: Me and my fantasy team disagree, and there was a piece at Fangraphs about this too.)

Alfredo Simon
Put up a pretty decent year last year as a starter for the Reds. Before that he was more of a reliever, with a couple of starts here and there. It’s pretty crazy that he’ll be in the Tigers rotation with such a wonky track record but like with Greene above, it could be a nice pick up if last year wasn’t a fluke.

Kyle Lobstien
Spot starter called up while Verlander’s on the DL. I made fun of his name last year when he spot started for Verlander last year against the Royals, and he was lights out so I won’t do it again.

BULLPEN
Goddamn, Detroit. Invest in a fucking bullpen! Wait, actually don’t. This is fun to watch.

Joakim Soria, Closer
Former Royal alert! There was a time when Soria was KC’s only good bullpen option. Now he’s Detroit’s. For some reason he was in a battle for the closer role with Joe Nathan but luckily for Detroit fans, Nathan had to go on the DL.

Joe Nathan, Setup Man
It was kinda sad last year watching Jonathan (get it) blow save after save. It was like watching Sisyphus trapped in a Kafkaesque nightmare. This year he will start out on the DL. He is 40, btw and doesn’t have much left.

Al Alburquerque
No, he’s not a character from Tarantino’s Django Unchained, he’s a Dominican relief pitcher for the Tigers with an amazing name! He isn’t as good as he should be with that name—his numbers look find on paper but all of these guys have blown a few leads.

Joba Chamberlain
Crazy muppet-man who turned his Tommy Johns surgery scar into a smiley face will be back in the bullpen for the Tigers this year, much to the consternation of Tigers fans everywhere. He, along with Alburquerque and Nathan blew a lot of leads last season. It should be noted that he no longer looks like an insane mole person, and that he’s only one of three Native American ballplayers in the major leagues. It’s sad that he’s no longer a starter–now he’ll never get another chance to lead the majors in HBP like he did for the Yankees back in ‘09. Another thing you have to look out for with Joba is that he’s from Lincoln, Nebraska. Don’t ever trust anyone from Lincoln, Nebraska. Those Cornhuskers will husk your corn, bro!

Ian Krol
When I read this name, I think of a Neanderthal who’s been found in the Alps, unfrozen, and who becomes a sensation as a rookie closer. Yes, I hear what you’re saying to me, dear reader: Throw in Pauly Shore and I think we’ve got something to work with here!

SO BASICALLY
The Detroit Tigers haven’t looked this weak in about five years, but they still look extremely good. They have several of the best guys in the game, but the bullpen is their Achilles Heel. They blow lead after lead, but usually the hitters bail them out by tacking on more runs. The formula is a bit different this year due to the significant downgrade in starting pitching, so the AL Central could be wide open. Given where the season is after the first few games, the upgrades to the ChiSox and Indians might just be hype, and the Royals look stronger than ever, but we’ve got a long way to go.

THE FUTURE
Did you ever watch the X-Men cartoon back in the early nineties? Remember that scene in Days of Future Past when the Sentinels control everything and there’s a quick shot of a bunch of tombstones with the names of various members of the X-Men on them? Well, that but with ‘Miggy’ and ‘Verlander’ and ‘V-Mart’ etched in the tombstones instead. Time is not on these Tigers’ side, and let’s just say they don’t have a lot to work with in the minors. The Tigers farm system is ranked dead last. They do have lot of money to spend on more free agents, so all is not lost.