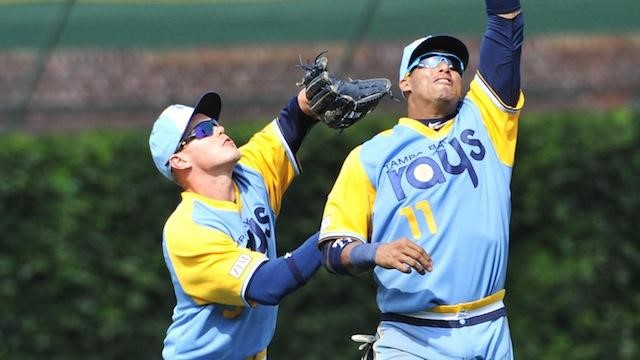 Much of the hype and fun has oozed out of the toothpaste tube that is The Tampa Bay Rays. The MLB’s most interesting and winningest manager, Joe Maddon has moved on to Chicago. Their magical de facto GM Friedman has also moved on and is now dealing with more money that he knows what to do with in LA (mostly paying former Dodgers to play for other teams [see Matt Kemp]). The Rays also lost the Wil Myer’s Trade twice — as now they have neither James Shields nor Wil Myers (they are however running Jake Odorizzi out there every 5th day as a starter, and he was part of the package shipped to TB from KC for Shields, so there is that [he was also part of the package the Brewers sent to KC for Zack Greinke back in the day {hooray for trivia}]). They also no longer have that cornerstone of the organization, Ben Zobrist. Most of the Rays who made the Rays the Rays have been traded away. Also of note is the 37 year old manager Kevin Cash, who’s never ran a ballclub.

The corners and outfield are basically set, as is everyday catcher. The middle infield is a bit of a tossup right now, and both starting candidates are much worse defensively than the guys they’re replacing. The starting pitching and infield defense that is a hallmark of the team could be in for a stark decline.

C: Rene Rivera
The Rays are high on Rivera, who is good at pitch framing and coming off a breakout year last year for the Padres. There is a lack of depth at catcher, he should be an upgrade for the Rays if he can stay healthy and catch like 90% of games.

1B: James Loney
Never been an All-Star, slightly above average, not a lot of power. Loney is fine defensively, hits line drives and gets on base. The Rays would be well served if he can step up a bit and at least put up the 2.8 WAR he had in 2013.

2B: Logan Forsythe
Will start out the year as the second baseman, then will probably be relegated to other half of a platoon at 2B with Franklin who is currently injured and won’t be ready for Opening Day. Big opportunity for the former 1st round draft pick to prove he can be an everyday player.

SS: Asdrubal Cabrera
Looks to be the starting shortstop, a veteran guy who was great with the Indians but is having a horrendous spring training offensively after a down year with the Nats in 2014.

3B: Evan Longoria
The Rays are hoping Longoria can to return to the guy he was in his early 20’s when he was a 3 time All Star. Regression is a bitch, however, and at 29 his window to be a MVP-caliber player could be closing. He’ll be batting cleanup, and looking to bounce back to the days of 30+ homers a season. Oh, he also had his worst year defensively last year … so pour on more hope there.

LF(/CF): Desmond Jennings After a great rookie year in 2011, the Rays have been waiting for Jennings to be the star player they thought he was. He’s been fine both defensively and offensively but nothing really special.  At 28 and in his prime, he may have already peaked. That said, the Rays will need everyone to step up their game this year if they intend to be anything more than average. Experimenting with him as leadoff appears to be over, and he’ll probably hit middle of the order.

CF: Kevin Kiermaier
Had a breakout season last year, looking for a full year of success this time around. He’s fast, has a good arm and a bit of pop. He’s also a very handsome man. Mmm, and his favorite song is ‘Wind Beneath My Wings.’ He’ll probably be lifted against lefties for David of Jesus (Not to be confused with Steven of Jesus, below).

RF: Steven Souza
An ‘older’ prospect traded for from the Nats, will be playing the role of Wil Myers. Oh look, he found Jesus in the offseason. That’s not annoying at all. Oh look, he got suspended for using performance-enhancing drugs. That’s not annoying at all. Oh look, he made that spectacular catch to save Zimmermann’s no-hit bid last year in the 9th inning. That’s kinda cool actually. Souza’s battled a couple of injuries this spring, and is looking to make an impact with his bat in the Rays lineup. So far he hasn’t proved he can hit in the majors, but pretty much everyone thinks he can.

DH: John Jaso
I guess Jaso’s the backup catcher? Oh wait … not after two concussions last year. They’ve been playing him in the outfield a bit. A DH with 32 total homers in the majors over seven seasons? Hmm … not sure what’s going on here. Perhaps it’s the DH-by-committee type thing that is supposedly the next big thing instead of 30+ year old guy who only strikes out / hits homers?

Nick Franklin 2B Some projections, scouts, etc are high on him. He’s never really had an extended amount of time in the majors, so yeah. He played some for the Mariners last year but didn’t really live up to potential. Could platoon at 2B as it isn’t really set and he’s recovering from an oblique strain. He was in the mix for starting SS and 2B but didn’t do himself any favors getting hurt.

David Dejesus Could be traded for starting pitching, or he could platoon with Kiermaier.

Curt Casali is battling with Bobby Wilson for backup catcher. Stay healthy, Rivera. The Rays got rid of everyone else, including a Molina brother.

Tim Beckham and Alexi Casilla are battling for a backup infielder role. Jake Elmore is also a long shot.

Shallow depth and banged up starters could be a huge issue. If Smyly & Cobb are healthy by Opening Day, this might be manageable. If either of them have setbacks—uh oh. The days when the Rays had multiple starting pitching prospects ready to go are behind them.

Chris Archer
The ace of the staff, one guesses now that Price is gone & Cobb is injured. It’s fitting that he should replace David Price as he is a bit of a role model for the younger starter. He’s a cool kid who will probably reach stardom in the next couple years.

Drew Smyly
Currently out with a bum left shoulder, there is hope he’ll be ready by the end of spring training. If there is a theme to the 2015 Rays spring, that’s basically it: HOPE. Smyly’s got great stuff when he’s healthy, unfortunately staying that way has been an issue for him so far in his career.

Alex Cobb
Will miss at least part of the season with forearm tightness, again the Rays hope the issue will not sideline Cobb for more than a few weeks. Cobb’s injury has provided Archer with a window to pitch on Opening Day and show that he’s got #1 stuff. Apart from his excellent pitching, you may remember Cobb as the guy who caught an Eric Hosmer line drive with his face in 2013. He, like Smyly, has never pitched 200 innings in a season, so injury is always a concern.

Jake Odorizzi
With a name like that, you must have good stuff and he definitely does. The Wil Myers trade would have been a complete disaster for the Rays if it wasn’t for Odorizzi being a throw-in prospect from the Royals. While he probably would have been a reliever in the Roys system, the Rays saw his upside and he’s rewarded them with an innings-eating 2014 that ended with his name in the mix for Rookie of the Year. This year he’s their #2 starter.

Matt Moore
Currently recovering from TJ surgery, Moore should rejoin the rotation at some point early in the season. He was an All Star in 2013 so when/if he’s back and healthy he’d be a boon to a rickety rotation with lots of good arms made of glass.

Alex Colome What a mess. Colome was supposed to fill in for Moore, then move to long relief, but visa issues and now pneumonia will probably keep him on the DL as well. Yikes. Last year he was suspended 50 games for a drug violation. He’s actually been really good in the few starts he’s made, so keep an eye out for him.

Everett Teaford? Ok, so right now if you’re keeping count only two of the Rays starters are 100% ready to pitch after Opening Day. That leaves room for guys like Teaford to make the rotation at least for a few weeks. Teaford is another reliever reclamation project the Rays picked up from the Royals and are turning into a starter. He started a few games for the Royals back before they were good, and he’s not very good. He’s also not on the Rays 40 man roster, unlike some of the names below. Will not make the big league club.

Nathan Karns? Another guy vying for a spot in the rotation. He’s gotten rocked a couple times in spring training, but also has had a couple quality starts. He’s on the 40 man roster so he’s probably a lock at this point.

Mike Montgomery? Traded to the Mariners on March 31st.

Matt Andriese? Probably the only guy in the Rays rotation this year who doesn’t have a Wikipedia page.

Should overall be a strength again. Some of the guys above will be here when and if the injured rotation returns. Here are a few guys of note. There’s several others.

Grant Balfour Failed closer, coming off a terrible 2014 is looking to regain form. Like most Australians, this guy is a complete dick and I’m happy with his struggles and demotion. Lots of ‘Ball Fours’ from Balfour last year, am I right?

Kevin Jepsen Setup man coming over from the Angels.

Jake McGee Injury prone closer should be back in May.

Last season was the worst season for the club since they were the Tampa Bay Devil Rays, and things are already looking down for the team, who is dealing with injuries and lack of SP depth. Some projections do show the team with some upside, and the AL East is looking pretty weak so they could actually hang in there. There are a lot of questions here, and how the makeup of this team with lots of new players will gel is basically a mystery.

The system is no longer stocked with prospects which was always a given for a 5 or 6 year run but now there’s not much left. Team seems to like damaged goods, guys who get in trouble or suspended. Of note, Justin O’Conner is a catcher with a good arm who’s also spent some time in the outfield. Ryan Brett is a speedy second baseman who could come up in September for pinch-running duties. There’s also Mikie Mahtook an outfielder who would be likely to be called up if DeJesus is traded or if another outfielder is injured. Finally, we have Hak-Ju Lee, a Korean shortstop who is a top 100 prospect.